Not many people know that Ravenna was three times the capital of the Western Roman Empire between the 5th and 8th centuries AD and that eight of its historical buildings have been chosen as UNESCO World Heritage Sites. Here, in Romagna, ancient and modern merge, chase after one another and eventually accompany you as far as the open countryside that surrounds this beautiful city!

And this is also where our itinerary of historical Italian cafes continues, through the towers, mosaics, cloisters, and ancient workshops of Ravenna.

In the spring of 1877, Bott Boiller, from Switzerland, founded Caffè Roma-Risorgimento, and it immediately became one of the favourite meeting places of the residents of Ravenna. But it was also a point of reference for tourists, thanks to its central location in Piazza del Popolo, formerly known as Piazza Vittorio Emanuele.

In 1911, it changed hands and name, with the photos taken of the café back then labelling it as the “Roma Hotel-Restaurant”. In the post-war age, the building that now hosts the bar was the headquarters of Banca Commerciale Italiana for a long period of time.

Over the years it has changed hands several times, while always maintaining its family atmosphere, and offering its patrons a warm, typically “romagnola” welcome.

The café underwent its latest metamorphoses in June 2020, when “the Roma” – as the people of Ravenna called it – became a café and also a restaurant, managed by renowned local restaurateur Nicoletta Molducci.

The historical café named Bar Byron can be found beneath the striking colonnade in Via Gardini, and its history is just as unique as its location. In 1951, Arrigo Subini named it after the English poet Lord George Byron, who lived in Ravenna and adored the city.

Back then the patrons of the bar included writers, poets, and artists of the Accademia. And it’s safe to say that many works of art were inspired by the discussions and events that took place around its tables. In more recent years its customers have included sportspeople such as Bartali and Coppi.

Today Bar Byron is a café and chocolate shop, and it also offers various vegan specialities.

In the post-war period, the Belli cafe, together with the Roma bar, was the hub of the city’s social life. Back then, it wasn’t located in its current site in Via Arnaldo Guerrini, but instead in Via di Ponte Marino. Remembered by everyone for its elegant style, typical of Parisian cafes, it attracted artists and writers.

Then, in 2013 – after a long period of inactivity that drew the attention, and affection, of the local community – the historic Caffè Belli reopened its doors. With over one hundred years of history under its belt, today the café still offers an internal garden.

Different atmospheres have been created in the various spaces, including a reading area where patrons can relax and lose themselves in a good book. The last change of management dates back to 2016 and today the Belli is run by Lodovico Miotto and Francesco Polo.

Lodovico Miotto and Francesco Polo are also the names behind two other noteworthy historical cafes reopened in Ravenna.

These are Caffetteria Cavour in Via Camillo Benso di Cavour and Bar Ramiro in Piazza Caduti. In Caffetteria Cavour, located in front of two nineteenth century columns, and so beside the “Dantesque area” the pair have successfully promoted the history and surroundings that make the café unique. 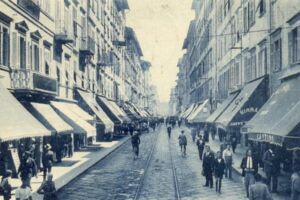 28 September 2020
Here we are, strolling through a city that can boast some of the oldest Italian cafes: this time we’re setting off to discover the historical...