This time, our journey on the trail of Italy’s ancient cafes takes us to central Italy, among the green rolling Umbrian hills: the perfect opportunity to learn more about the historical cafes of Perugia, the city of chocolate and of the Umbria Jazz Festival.

If you’re wondering which of its bars have accompanied the passing of time with the rich flavour of espresso coffee, look no further. We’ll find out by exploring the streets and lanes of the most important Umbrian city, starting from the city centre. But the first surprise will be sure to leave a bitter taste in your mouth: many of the city’s most prominent businesses are now closed.

Historical cafes of Perugia: one closure after another

Corso Vannucci is the main street of Perugia, completely pedestrianised since the late 20th century. In the past, it hosted four glorious historical cafes of Perugia, located at a short distance from one another, namely Caffè Falci, Caffè Sandri, Caffè Medio Evo, and Bar Vitalesta. Only one of these is still in business today, Caffetteria Pasticceria Sandri. Instead, the others all met with the same destiny, and were forced to close their doors.

Known for decades as Caffè Falci before being renamed Caffè di Perugia, this bar was located in Via Mazzini, a side street off Corso Vannucci. Historically, it was the meeting place favoured by the city’s young people, who would gather there and have fun wooing the foreign girls visiting the city.

Recently, its popularity had risen again, to such a degree that many residents of Perugia considered it the coolest bar in Perugia. Following a series of closures and re-openings, at the beginning of 2020, the bar closed permanently, and it is rumoured that a restaurant is to be opened in its place.

Another legend of this important Umbrian city that has sadly come to an end is Caffè Medio Evo, considered by many as the city’s top pastry shop, along with Caffè Sandri. Having opened at the beginning of the early 20th century as a barber shop, it was provisionally transformed in the 1920s, later turning permanently into a café.

In the bar, now abandoned, on the ground floor of Palazzo Baldeschi, the Gothic arches made with stone from the medieval and the rooms enhanced by extraordinary classical frescoes still stand to tell the tale of the luxury that reigned there in the past, a heritage that has remained, at least for now, without heirs.

With its all-wood décor, and Liberty style, Bar Vitalesta was unfortunately yet another one of Perugia’s monuments that closed. It was well-known as the “sportsman’s bar”: here, every Sunday, the city’s residents would gather to follow the results of the Perugia Calcio football team, especially when it was playing away. Unsurprising really, since the bar had been opened by Peppino Vitalesta, centre forward and heart and soul of the local team in the 1930s.

Caffè Pasticceria Sandri has existed since even before Italy was unified. 1860 was the year in which the historical café of Perugia was founded by Jachen Schucan from Switzerland, whose name was soon Italianised to become Giacomo Schucani. Legend has it that he set up home in Umbria with his family because the landscapes of the area reminded him very much of his homeland, the Engadin valley.

Business boomed for half a century until Giacomo died in 1899. The café then changed hands and was managed by Giacomo’s eldest son Claudio Schucani, who continued developing the family business, by launching the sale of coffee, confetti sweets and bottles of homemade traditional liqueurs.

The toils and rebirth of the Sandri

When Claudio passed away unexpectedly before his time, a difficult period ensued for the bar, characterised by huge financial losses. Claudio’s children, who had all still to reach legal age, were assigned to a guardian, and in 1918, a distant relative named Nicola Zonder, stepped in to save the business. Zonder, who named the café Sandri, (the Italianised version of his surname), took up the reins of the business and managed to turn things around.

From 1931, his nephew Guglielmo, now an adult, co-managed Caffè Sandri with Zonder, later becoming its sole owner. In this period, the bar’s transition from drugstore to cafe, pastry shop and liqueur distillery became permanent, and it continued to gain prestige, appealing to its clientele of aristocratic families.

The interiors and illustrious guests of the oldest café in Perugia

The oldest café in Perugia is powerfully characterised by the wonderful, late 19th century frescoes by a pupil of Perugia-born painter Annibale Brugnoli, together with heraldic decorations and emblems from Switzerland and the House of Savoy. The décor is in solid walnut, and the style is Art Nouveau, featuring 19th century marble, crystal, and silver cutlery services, porcelain cups and saucers. 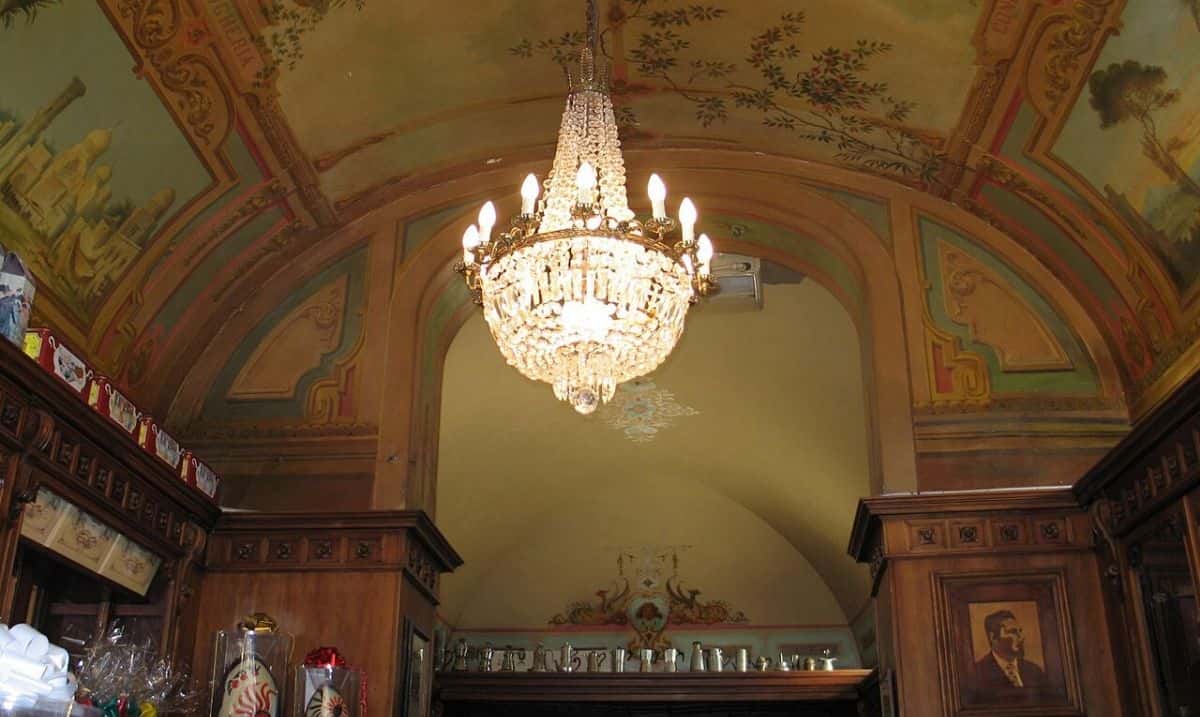 Many illustrious customers have crossed the threshold at Caffè Pasticceria Sandri over the decades, including King Gustaf VI Adolf of Sweden, Queen Beatrix of the Netherlands, and the British Queen Mother Elizabeth, to name only its blue-blooded clientele.

The best pastry shop in Perugia

For many, Caffè Pasticceria Sandri is the best pastry shop in Perugia, attracting locals and tourists with its delicious treats: chocolate cakes, tasty espresso, Sacher cake, gelato, cream puffs with Pompadour and the characteristic tortiglione Perugino, an almond cake in the shape of a snake. A skill handed down through the generations until Viennese pastry chef Franz Sacher swapped the recipe for his famous cake with the recipe for cream puffs.

After a short period of closure between 2013 and 2014, today Caffè Pasticceria Sandri is still managed by two fifth generation members of the Schucani family, Carla and Nicoletta. 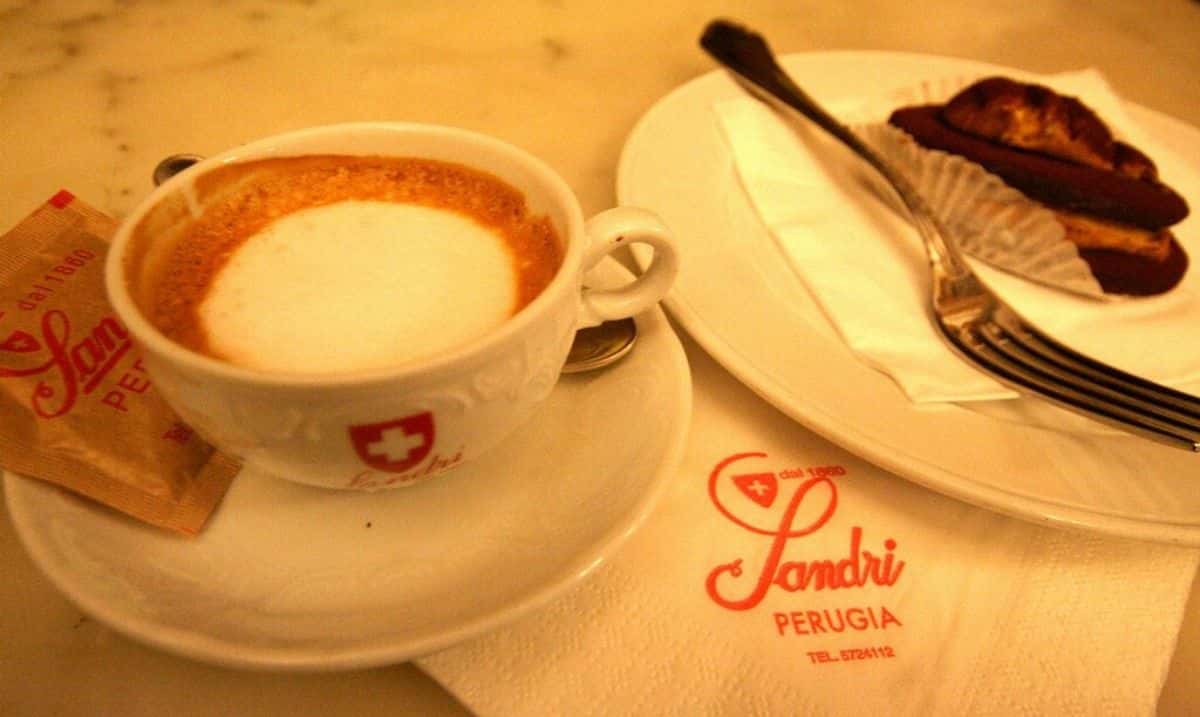 Opened in 1925 by six Perugia-born milk producers, today, Antica Latteria is still located in its original site in Via Baglioni, where it moved in 1930 following a short period in Via della Gabbia.

Antica Latteria’s signature speciality is the tastiest cream in the world, popular with locals and visitors to Perugia alike. This is all thanks to the quality of the product, but above all to owner Umberto Olmati’s high level of craftmanship: here the cream used is still hand whipped.

It’s no coincidence that the bar’s best-selling product is maritozzo (a kind of sweet, soft bread) with cream. Another favourite is its coffee with cream, to be savoured in line with three strict rules hung on the wall of the cafe:

Did you know that Italy is full of vintage bars with incredible charm? Our tour of our beautiful country continues to fill us with passion at each new destination: after the cafes of Perugia, come with us and discover the ancient cafes of Brescia. You won’t regret it! 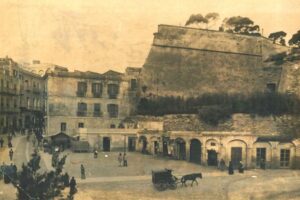