Our tour of the world’s ancient cafes continues. Having guided you through the historical bars of Paris and Barcelona, it’s now time to cross the Channel and discover the historical cafes of London.

A coffee in London, in three historical cafes steeped in history

Cafes in London: The George Inn

To get an idea of how long The George Inn has been around, just think it was mentioned by writer Charles Dickens in his novel “Little Dorrit”, written between 1855 and 1857! Back then, the George was only a cafe, unlike now, when it also functions as a restaurant and pub.

The George is not only famous for being one of the oldest cafes in London, but also for being the city’s only surviving coaching inn, complete with impressive balcony. It is located near London Bridge, one of the main bridges over the Thames, and it spans an area of no less than 250 square metres.

The cafe was built back in 1676 and for Londoners it also goes by the name of The George and The Dragon. A reference to the popular legend of St. George who defeated a dragon (representing paganism) with the force of his Christian spirit.

As everyone knows, many of the pubs in London are very historical, among the few in the world that we can define as ancient. And Ye Olde Mitre is one of these, having been built in 1546 and then extended in 1782. From the year 1800, it already featured a cafe area, and this is why it is considered one of the most ancient cafes in London.

The pub famously hosts the cherry tree around which Queen Elizabeth I is said to have danced with Sir Christopher Hatton. It was also used as one of the locations for the film “Snatch” directed by Guy Ritchie in 2000.

And no list of ancient London pubs would be complete without the famous White Hart, located in Covent Garden behind the gallery. Here’s why: it claims to be the first licensed premises in London, obtaining its licence to trade as a pub as early as 1216.

Although not everyone agrees with this information, some only dating its opening as a pub to the mid-1800s, for Londoners, the symbolic title of “the oldest licensed premises in London” is held by the White Hart. A historical supremacy also proclaimed on the sign at the door, where the date 1216 is clearly visible. The pub has an extremely well-stocked cafe area, where its excellent cappuccino is one of the highlights on the menu. 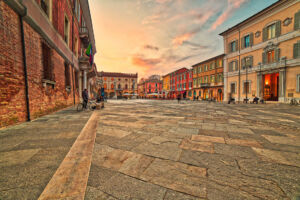 16 November 2020
Not many people know that Ravenna was three times the capital of the Western Roman Empire between the 5th and 8th centuries AD and that...