The espresso coffee cup: invented by an Italian!

Did you know that “tazzina”, the Italian word for “espresso coffee cup” derives from “tazzini” because Luigi Tazzini was the name of the Italian who invented the coffee cup? Sit back and get comfy because we’re about to tell you a good story.

The Italian who invented the coffee cup

Our story begins in Brera, in Milan, at the Brera Academy between the end of the 19th and the beginning of the 20th century. There, one of the students attending the Academy was a young, talented painter from Italy whose name we have already revealed: Luigi Tazzini.

Tazzini was the inventor of various small cups that had never been seen before:

The idea of the espresso coffee cup was both simple and ingenious. Probably, as often happens in these cases, it was the solution to one of the inventor’s personal everyday needs. Having a handle with which to grip the bowls traditionally used back then more comfortably.

The espresso coffee cup: from prototype to sales

Luigi Tazzini was artistic director of Tuscan firm Società Ceramica Richard-Ginori. In that role, he succeeded in steering the production of his cups towards the new Art Nouveau style which, in that period, influenced Italians from as far away as northern Europe.

The designs were there, and so was the production capacity. The people of Milan enthusiastically welcomed his new convenient formula for drinking coffee, and the cat was soon in the bag!

Or at least, that’s the story we like to tell, with the same sincere frankness, the same conscious immediacy with which we drink Caffè Aiello in the morning. A single, boiling hot gulp of coffee, to be swallowed in one go, head thrown back. The flavour arrives afterwards: after the aroma, after that elegant, snappy gesture that true Italians make so effortlessly, after all that, the essence of black coffee hits the spot. And there it stays there for many minutes yet, sometimes even for hours.

This is the story of the Tazzini espresso cup. Handed down through the decades, it has reached the present day with all its energy and aroma intact. The people of Milan called it “il tazzinin” and they still do today. For the master baristas of Naples, it’s “la tazzulella”.

Did you enjoy the story of how the coffee cup was invented? If you’re a fan of the ancient tradition of coffee, find out how to grind coffee beans at home to relive the pleasure of an ancient, all-Italian ritual. 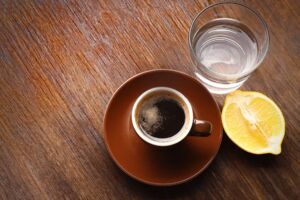 23 December 2020
It’s considered an effective home remedy for headache: coffee with lemon! This cure is also proposed by Chinese medicine and its effectiveness has been “scientifically” confirmed... 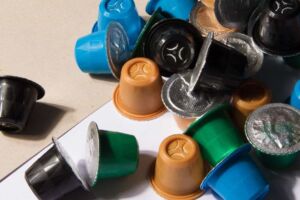 12 October 2020
Like the originals, Nespresso compatible capsules consist of a small cylindrical container, generally in plastic or aluminium. Inside, there is a single dose of Arabica...