Here we are, strolling through a city that can boast some of the oldest Italian cafes: this time we’re setting off to discover the historical cafes of Livorno, places that have long characterised the cultural and social life of the Tuscan town. A unique heritage, even if, unfortunately, very few have survived until the present day.

There are various reasons why these meeting places easily put down roots here. Firstly, the availability of the raw material. Livorno was one of the first Italian cities to be reached by coffee, on board a privateer. And then there was its vibrant artistic life, the cultural contamination between different nations, not to mention the open, friendly character of its locals.

As its coffee shops opened and multiplied, especially in the streets in the city centre, overlooked by beautiful aristocratic and upper class buildings, a real tradition developed and has survived until today: ponce (or punch), a typical drink from Livorno consisting of coffee laced with warm rum.

We’re starting our journey of discovery through the historical cafes of Livorno in the very café where Livorno-style punch is said to have been invented: Bar Civili in Via del Vigna, a very busy road near the station, and a point of entry to and exit from the city.

Established back in 1890, Bar Civili soon became something of a city institution and still is today. A retro atmosphere evokes the rich history of the ancient bar, haunting ground in days gone by for the likes of Amedeo Modigliani, Renato Natali, Giovanni Fattori and Silvestro Lega. Everyone who visits Livorno must stop off here, taste the dish of the day and, above all, savour a glass of the original Livorno-style ponce.

Although, unfortunately, it has now been closed for many years, Caffè della Posta is still perhaps the oldest, most famous café in Livorno, opened in 1851 opposite the Post Office building, looking on to Via Grande. It was a very sophisticated bar, with large mirrors and waiters in tailcoats.

Caffè della Posta was a favourite with countless intellectuals and patriots, including Giosuè Carducci, Francesco Domenico Guerrazzi and Giuseppe Mazzini. Here you could savour a very alcoholic punch, or poncino, which helped make the café famous.

The story of Caffè Bardi is short but intense, as it was only in business from 1908 to 1921. As we are reminded by the 2003 epigraph on the building overlooking Piazza Cavour, the ancient literary café was a “meeting place for artists and men of letters from all over Italy”.

In particular, the patrons of Caffè Bardi included the most important painters in Livorno, such as Amedeo Modigliani who loved sipping a glass of ponce here, accompanied by half a Tuscan cigar. But he wasn’t the only one: the bar owned by Ugo Bardi and his wife witnessed a long stream of odd celebrities: some became their good clients and others disappeared before long, preferring to avoid the café due to the furious arguments and discussions that animated it every day. 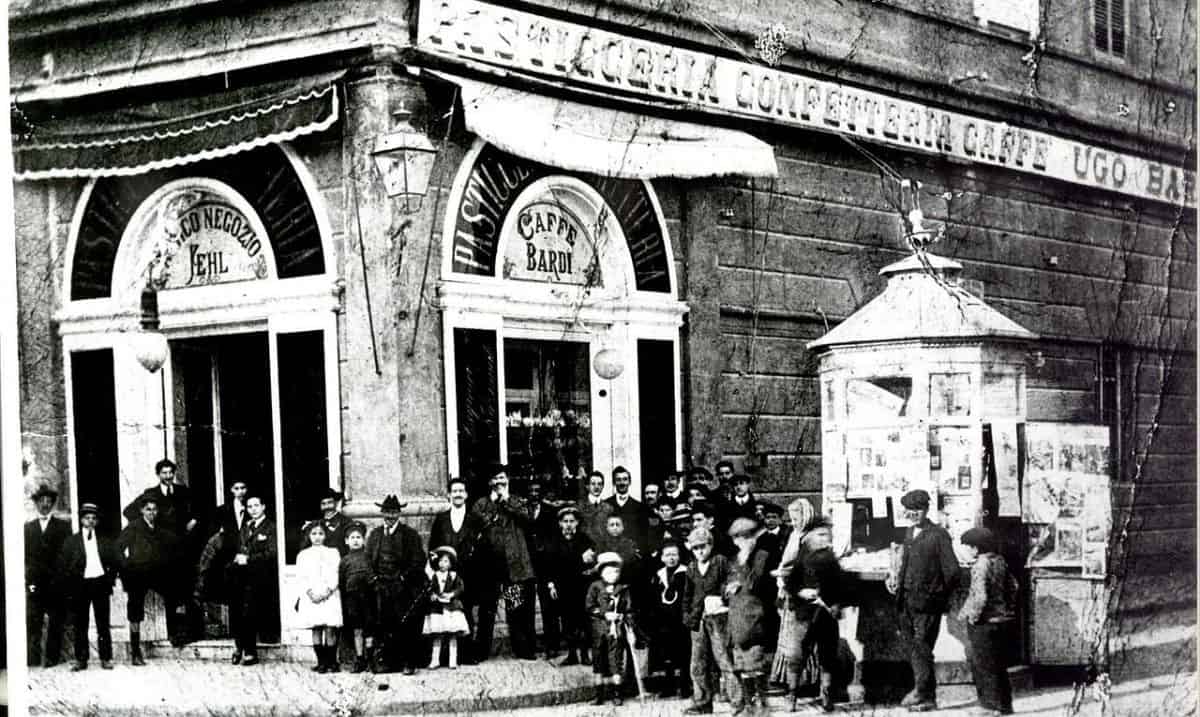 Other historical cafes of Livorno

There were many other historical cafes in Livorno that went down in the city’s history books, but they have been closed for a very long time and unfortunately all that remains are a few names and anecdotes: Caffè L’Americano, Caffè Greco with its customers from all over the world, Caffè Minerva, the place from which the first patriotic demonstrations departed in 1847/48, Cafè Sergenti, Cafè Sbrogi which was destroyed in 1923 following a violent clash between anti-fascists and Fascist squadristi, Caffè della Speranza and Caffè del Giappone, to name but a few of the best-known.

Are you enjoying our trip back in time? Let’s stay in Tuscany but move not far off to discover the historical cafes of Florence: our tour of Italy in the trail of its historical cafes continues.